THE ONE AND ONLY

The world’s only double-barreled cannon was built in Athens and is displayed on the grounds of City Hall. Built to “mow down the enemy somewhat as a scythe cuts wheat,” the cannon was never actually used in combat. The prototype was a spectacular failure in test firings and never really mowed down anything but trees, a cornfield, and one unfortunate cow. It was featured in Ripley’s Believe it or Not television show.

A white oak tree that started growing in the mid-16th century at the corner of South Finley and Dearing Streets in Athens, was dubbed”The Tree that Owns Itself,” having been granted legal ownership of itself to the tune of eight feet of land on all sides around its base. In 1942, the oak fell and a new tree was grown in the same spot out of one of its acorns. This current tree is called “Son of the Tree That Owns Itself” and is a local landmark. It is also recognized by Ripley’s Believe it or Not!

Athens is world-renowned for its music scene for having been an important part of the evolution of alternative rock and new wave music. Nicknamed “the Liverpool of the South”, it has nurtured such bands as REM, the B-52s, Widespread Panic, Drivin’ and Cryin’, and Pylon, just to name a few. 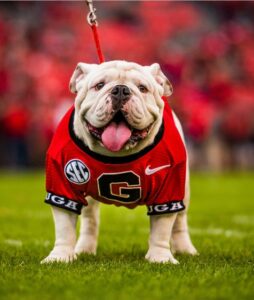 The famous Georgia Bulldog mascot: The original Uga was owned by a man named Frank W. Seiler (born February 20, 1933), who is a trial attorney from Savannah, Georgia. You may know him from his role as an attorney in the true-crime book Midnight in the Garden of Good and Evil.

He is also the owner of the University of Georgia Bulldogs mascots named “Uga.” This beloved English bulldog (and his successors) have represented the University of Georgia athletes since the 1950s. Seiler and his family have owned and maintained the unbroken line of English bulldogs, known successively as Uga I – X. Each has been descended from the original Uga and has frequently been the son of the predecessor.

Several Ugas have retired as part of pre-game ceremonies, during which there is a “passing of the collar,” and the new Uga begins his reign. During these ceremonies, the fans typically chant “Damn good dog,” a tradition dating back to Uga I. At present, Uga X is the current UGA mascot. He was introduced at the Nov 21, 2015 game against Georgia Southern.